Brothers at the Wrist 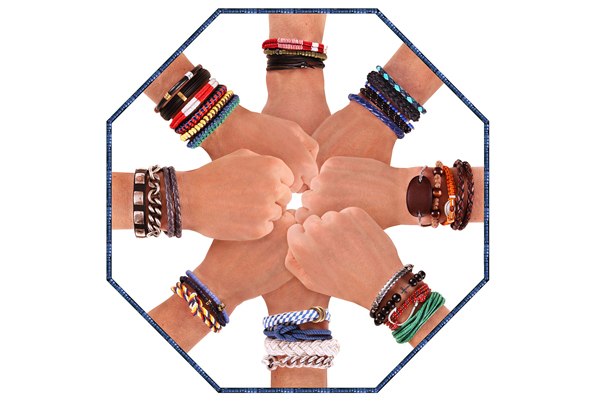 KANYE WEST may go down in history for any number of things: his many musical genius moments on five platinum-selling solo albums; his less-than-genius personal-appearance moments, like his notorious interruption of the 2009 MTV Video Music Awards, or his dust-up with Matt Lauer on “Today.”

But while the man is known for music and moods, don’t rule out his bracelets. Since appearing at the Coachella music festival last spring with a wrist full of bracelets from Cartier and Burkman Bros., Mr. West has not only given his endorsement to a trend on the rise, but he has, whether he likes it or not, also given it his name.

Almost immediately, fashion and music blogs started referring to any and all bohemian wrist-tangles as “Kanye bracelets.” Burkman Bros. was so besieged by demand for its bracelets that the company introduced an e-commerce site to handle it, said Doug Burkman, one of the two brothers who are the owners. They have now sold more than 50,000. As of Wednesday, 790 auctions for bracelets on eBay made reference to the stylish rapper and producer.

But the vogue for wrists roped in beads and twine is not driven just by Kanye followers. Courtesy of accessories companies like Miansai, Luis Morais, Tateossian and Kiel James Patrick, there was already a significant under-the-radar movement of guys, even conservative ones, gravitating toward them.

“I remember back in 2008, meeting a banker in Switzerland who told me he had one of my bracelets,” said Mr. Morais, who is based in Miami. “If you had told me that I would sell a banker the same bracelet I sold a rock star, I would never have believed you.”

The Burkman brothers, whose clothing line has a vintage-surf feel, learned about the trend in a different way. “I’ve always worn bracelets, since I was little,” said Ben Burkman, Doug’s brother. “So when we started the line, we tied a little handmade friendship bracelet on every piece of clothing as a kind of bond with the guys who buy our clothes. Stores started telling us that some people were just taking the bracelets, and then stores like Fred Segal in Los Angeles asked us if they could sell them, so we knew we were on to something.”

To restate the obvious, the look is not about one perfect bracelet. What guys are after is a mix of colors, textures and materials, with a good, classic watch thrown in for good measure. You may want to max out at four or five lest you look more like Madonna ’84 than Kanye ’11. Especially since, unlike most accessories a man can wear, the Kanye bracelet often packs a bit of a punch, bringing a lot of color and personality to a relatively small piece of real estate. But then, a little jolt of transgression is exactly the point.

“I first noticed it a couple of summers ago in Capri, where I saw Diego Della Valle, the owner of Tod’s, with a load of colored bracelets on, and he’s a fairly conservative dresser,” said Jeremy Langmead, the editor of Mr Porter, the online men’s retailer (who said he was himself wearing four Luis Morais beaded bracelets). “Then I started seeing these Milanese businessmen wearing them with their suits. To me it looks like something they got on vacation and didn’t take off. It says: ‘I am not completely a conformist. I might look like a wage slave, but I’m a hippie at heart.’ It’s little bit of escape on your wrist.”

In other words, think of them as handcuffs that can set you free.